Ah, Papa Murphy’s, a port in a storm, refuge of the weary, and purveyor of bake-at-home pies! We have a love-hate relationship with Papa Murphy’s. Ric says, “It’s not Italian, but it’s tasty.”

Now-and-then we need a quick, fuss-free meal in front of the TV. This product is perfect for eating on the couch while watching a movie.

Papa Murphy’s is rather sterile, but it’s fun to watch them make your pizza.

For those unaware, Papa Murphy’s makes pizza you take home to bake. In 12-15 minutes you have a hot, fresh pizza for home consumption. They do not have ovens on-site nor a place to dine; Just unbaked pizzas to go, as well as salads, cookie dough, and soda. You walk in the door and 5 minutes later you wl out with a pizza. It won’t win any awards compared to pizza in Italy, but we’ve had worse. It’s better than frozen pizza and far better than Gallucci’s but not nearly as good as Hearth and Table or the Cafe on Hawk Creek. It is even better than the pizza at Cascade in the Val Gardena. 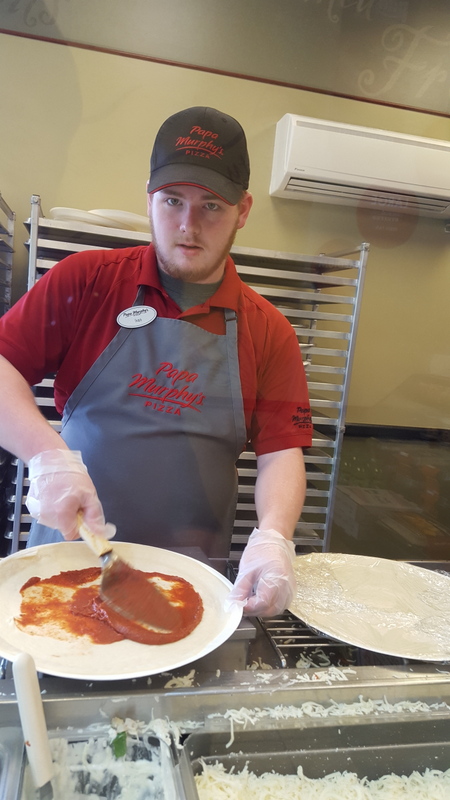 Our pizza master adds sauce to a pre-made crust. We like the thin crust as it comes out nice and crispy.

My Italian friends would probably be shocked at this product. But then, I have seen good Italian pizzas as takeaway and I cannot imagine the result is palatable. Pizza gets cold and soggy very fast in Italy. Maybe they reheat it? At least Papa M’s is hot.

A raft of decent mozzarella is added. Not fresh mozzarella, but it bakes up nice and gooey.

This is not a frequent occurrence for us. Since Hearth and Table just reopened (so we want to give them some time to shake off the newness) and who knows when The Cafe on Hawk Creek will reopen, this is our best alternative to making pizza a casa.

Fresh veggies and sausage complete our selection. At Papa Murphy’s one can get almost anything on a pizza, including many ingredients one would not find in Italy. I have to say. BBQ chicken pizza does not seem like a good idea but to each his own.

I am assigning it 8 points. 2 for taste/quality (all fresh ingredients), 3 for ambiance (at home), and 3 for service as the young people at Papa M’s are always so pleasant. A large pizza was $16.50. Hard to beat, but all-in-all, I’d rather be sitting at Da Remo.

The finished product, just out of the oven! I moved the olives over to Ric’s half.