We have completed our fourth week without pizza, are down a few pounds, and generally feeling like we are eating healthier. My jeans fit better and I had to throw out a pair of hiking pants that threatened to fall down. Despite the heat, we had a remarkable 95,000 steps on the pedometer for the week. Bravissimi noi!

Antica Taverna has a special place in our hearts and stomachs. We celebrated Thanksgiving there in 2012 and 2014, We’ve dined there for Christmas Eve four times, and twice on New Year’s Eve, plus about once-a-month year-round. It’s in the Good Day Rome Guide to Restaurants and we take most of our visitors there. We like the place. A lot. It’s like going home when we go to AT. 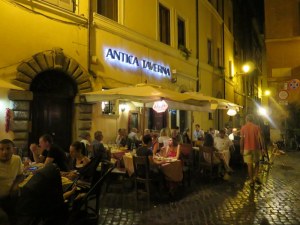 Antica Taverna’s golden glow. It’s away from the Piazza Navona hordes so you have to want to find it.

We were turned on to AT during our first trip to Italy, long before living here was even a thought. Being completely exhausted from touring all day, for two nights we dragged ourselves to an enoteca a stone’s throw from our lodging, Cul-de-Sac. A Canadian couple seated next to us said we should venture a bit farther to this place. They could not remember the name of it, but directed us, in very Italian fashion, to “Go down this street to the scaffolding and turn right. You can’t miss it.” That scaffolding guided us for almost two years as we returned in 2011 and 2012. I won’t go into all the facets of the story that have endeared us to Antica Taverna but the staff is very kind, the owner gracious, the atmosphere relaxed and happy, and they serve good Roman food at a fair price. When you dine there often, you get a sconto for being a friend and often a complimentary focaccia. Love it. 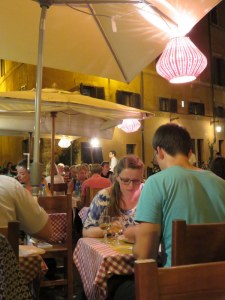 So this week’s pizza substitute was a meal at Antica Taverna. We asked Giovanni (our personal waiter and the restaurant manager) to hold the focaccia. “Siete in dieta?” he inquired. “Sí, meno carboidrato.” (Are you dieting? Yes, low carbohydrate.) We started with prosciutto and melon (hey, those are healthy carbs!) and moved on to our generous secondi of roasted lamb and roasted chicken. A bottle of house red washed it all down. The price was about what we pay for pizza, wine, and fritti at Taverna Rossini.

Over the years we have drifted to favorite dishes. Mine is the melanzane al forno (eggplant parm to Americans), which is made without any breading in Italy. But we had been eating eggplant at home all week, so I needed a little chicken. Ric loves the trippa (tripe), which I suppose he could have on a low-carb plan as it’s all protein. The lamb is good, the duck when they have it is excellent, and I love the sauteed mussels. When we dine with more people we like to order the sharable antipasto della casa which is an array of cooked vegetables accompanied by cheese and salume. It’s not on the menu; you have to know about it. We insiders know these things. 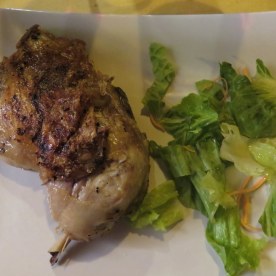 My roast chicken was done to a turn! So flavorful and juicy! I could not even eat it all, so Ric helped. 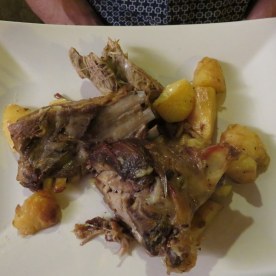 The picture looks like the dog’s breakfast, but Ric’s lamb was a generous and tender joint. We left most of the potatoes. We also ate cicoria ripassata. 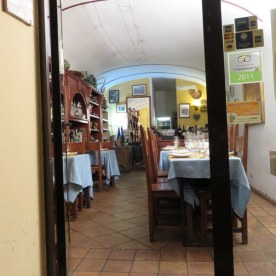 AT has a special room for overflow and larger groups. Tonight it was empty, but we’ve had for a larger group ourselves. 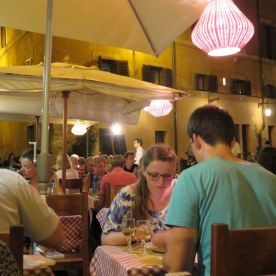 We did not suffer for lack of pizza, but we might break our diet on Thursday when we are scheduled to meet friends at another favorite place, Dar Poeta. Watch for a review.