We are still consuming pizza, I just have not had time to blog about it. We’ve been changing house, having guests, and traveling. In fact our most recent pizza was in Sorrento on Sunday night.

Closest thing I could come to a pizza picture on this trip: an ancient oven at Pompeii. Looks a lot like the ones we see all over Roma.

They day after we retired, we headed to Sorrento with our visiting son, Derek. Pompeii was somewhat crowded, despite the rain, and Capri turned out to be delightful once we left the cruise hoards and hiked up to the ruins of Tiberius’ Villa Jovis.

But back to the pizza: I forgot to take pictures but it was quite good! We ate at Il Leone Rosso twice in December 2011 when Ric and I spent a week in Sorrento.  Our memory was that it was good, but I was not doing pizza assessment at that time. They serve a good Neapolitan-style pie: thick crust, chewy, good quality ingredients. Ric’s pizza diavola with spicy salami and smoked provolone was the best of our three. My ortolana (vegetarian) could have used some more seasoning, but it was fine with lots of  vegies. The best part of Il Leone Rosso, was a surprise we did not notice until the next day. To get to that I have to go back to our arrival.

On Capri, hiking up to Villa Jovis we found a small flock of goats. Very cute!

Upon arriving we were seated near the back. It was too chilly to be outside. We received menus and a bottle of water, but then were ignored as a group of 16 American college students arrived to be seated, of course, right next to us. The entire waitstaff sprung to action to start taking care of this invasion. In fact we felt so ignored that we almost got up to leave. Derek (a recovering chef) said “Give them a minute more.” So we did. Luckily the waiter returned and we ordered. Hot and tasty fried calamari arrived promptly along with a decent bottle of Aglianico as well as beer for Derek. But then our pizzas appeared before we could finish the calamari. A little annoying, but they were hot and fresh and we were hungry. After dinner the check arrived and it was a very respectable figure for three. Having had some ridiculously expensive lunches of poor quality, we were happy. We headed out for a post-dinner passaggiata. 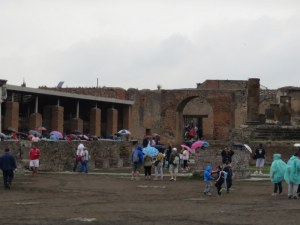 Somehow seeing Pompeii in the rain makes it more real, more sad. The only color was from umbrellas and ponchos.

The next morning Ric noticed the bill he had paid, Euro 53.50, was a reduction from the ricevuta fiscale of Euro 60.00! He had heard the waiter muttering about the pizza coming out too soon and it seems we were given a discount as recognition for less-than-stellar service. This, to me, is an amazing act in an area renowned for taking advantage of tourists. We had a good meal at a fair price and yet were given a discount for our perceived trouble. Good on you Il Leone Rosso!

I am somewhat arbitrarily assigning them 8 points rather than giving my usual analysis. Atmosphere is nice enough, service was clearly a concern that they righted, and the pizza better than some we’ve had. There’s a large menu of many Italian dishes, so there is something for everyone. If we go back to Sorrento, we will gladly return.